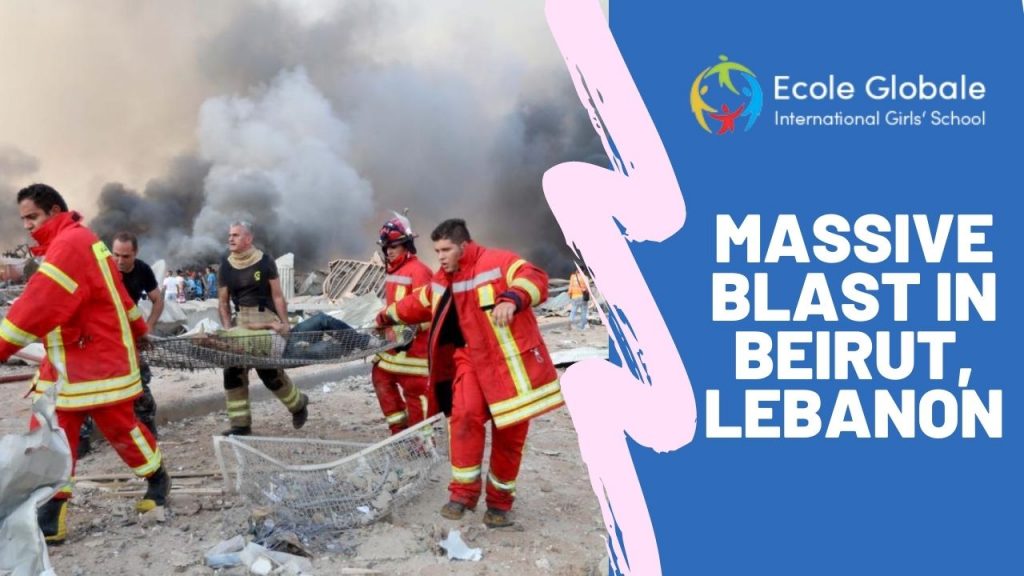 The year 2020 is undoubtedly giving us all the worst nightmares, everything terrible which can happen is happening to us.

On August 04, 2020, nearly 78 people got killed, and 4000 people got injured due to a massive blast in Beirut which is said to happen because of storing of highly explosive material. The explosion happened in a port warehouse near central Beirut and was so extensive that the shockwaves shattered windows, collapsed the buildings and shook the ground to the extent that Lebanese people felt that an earthquake had struck.

Beirut, which is already facing an economic crisis and an increase in coronavirus infection, the blast in Beirut on Tuesday shook the whole capital in an extreme way. There have been lots of bombings in Lebanon since the assassination of former prime minister Rafik al-Hariri, but this blast was one of the most powerful explosions in years to hit Beirut. Israel, which was involved in many wars against Lebanon, denied any foul play from their side and extended their help. People all over the world expressed their deepest condolences, and several countries, including the United States, Britain and France, offered their assistance.

According to the Interior minister the initial information which could be gathered from the blast in Beirut indicates that a highly explosive material, ammonium nitrate was seized years ago and was stored in the port as the reason for the blast. The quantity of stored ammonium nitrate was around 2750 metric tons.

A fire blazed in the port casting an orange glow in the night sky even after several hours of the blast. Helicopters and ambulances from the south and north of the country came to rescue victims and casualties which were spread everywhere. The hospitals in Beirut were tightly packed with wounded patients due to which several victims have to be taken for treatment outside the city.

The citizens shared videos of the blast on social media which showed a string of smoke rising from the port, followed by a tremendous explosion, sending up a white cloud and fireball into the sky. People in the range of 2 km from the port who were recording the incident from high buildings were thrown back by the shockwaves from the blast.

According to some sources, it all started by a welding work carried out in the warehouse. The authorities are still struggling to gather the full-scale impact of the disaster.

The sight after the blast and sequence of events was a horror to witness. Several weeping and injured people strolled through the streets in search of their loved ones. Others went to several overflowing hospitals in search of their missing relatives. On average, 200-300 victims had been admitted to a single emergency ward.

The people of the city have been warned about the release of toxic gases due to the blast and are advised to stay indoors and wear masks. The prime minister Hassan Diab addressed the nation and said that those accountable for the deadly blast would have to pay the price and that all the details related to the blast would be made public. The PM called for a day of mourning, and the banks are also closed on Wednesday, a day after the blast.

WHAT IS AMMONIUM NITRATE: AUTHORITIES CLAIM TO BE THE REASON BEHIND THE BLAST IN BEIRUT

This odourless substance has been a cause of several industry explosions over the decades. Some of them are

Ammonium nitrate becomes a highly explosive substance when combined with fuel oils, which is widely used by the construction businesses and also by insurgent groups like Taliban in ammunition.

In the agriculture industry, ammonium nitrate is used as a fertilizer which dissolves moisture and helps nitrogen to be released in the soil, which helps in plant growth.

In the United States, the regulations were more tightened after the Oklahoma attack. One of the guidelines under the chemical facility anti-terrorism standards states that more than 900 kg of ammonium nitrate storage factories is subject to inspection.

Ammonium nitrates is an indispensable chemical which is useful in many industries, but we should keep in mind that it can be hazardous too so we should use it cautiously.

One Reply to “Massive blast in Beirut, Lebanon: 78 People dead and 4000 Injured”