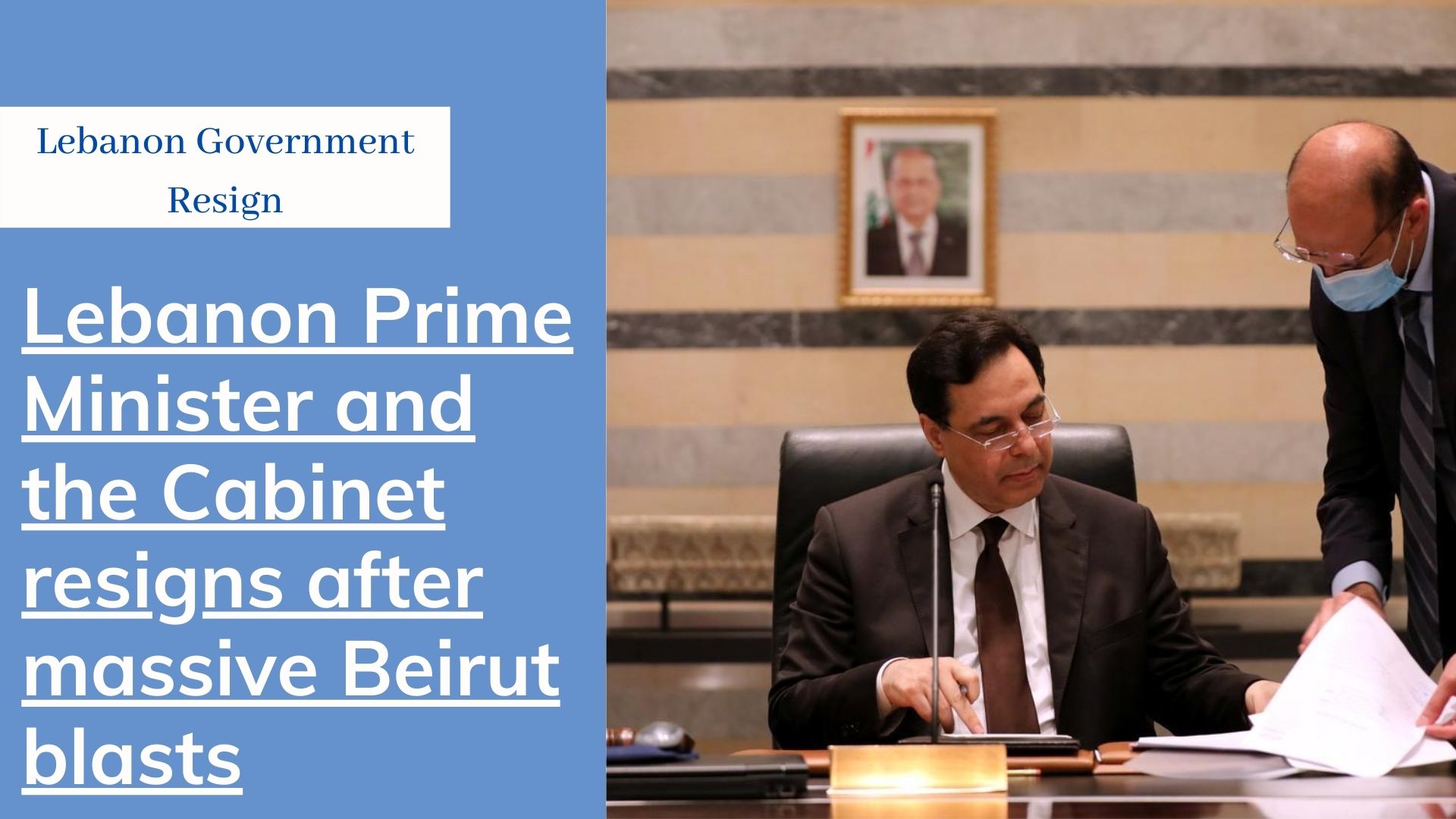 The entire world was left astounded by the appalling Beirut blast that took place on 4th August 2020. The people of Lebanon were furious and took to the streets, holding demonstrations and rallies against Prime Minister Hassan Diab and the cabinet.

The Beirut protest and the uprising rage let the PM to resign from his post on Monday along with the entire cabinet. The Prime Minister addressed his resignation through a short speech which was telecasted on Monday and said that he is willing to take ‘one step back’, to stand with the people of his nation. He will support the public in a fight for change and betterment. He confirmed his resignation by saying that he has made a decision to resign from the government. He ended by saying “May God protect Lebanon”.

The resignation was accepted by the President Michel Aoun who further directed the cabinet to function as a “caretake” until a new cabinet is appointed.

The explosion that took place on Port Beirut on 4th August killed at least 200 people and left more than 6000 injured which led to the massive protests. Hassan Diab accused the corrupt practices of the leaders for the beirut blast.

10,000 PARTICIPATED IN THE BEIRUT PROTESTS AGAINST THE LEBANON GOVT.

The protests took a violent turn as the people took to the streets after the catastrophic blasts which took many lives. The huge amount of protesters blocked the road near the Parliament and the situation got out-of-hand when people started throwing stones on the policemen and security forces. The government offices, banks and other places were vandalized and police had to use tear-gas to disperse the crowd. The outbreak led to the death of a policeman with more than 720 people injured in the process.

The outrage of the people against the government was significant as the people expressed their rage against the failure of the government. They condemned the acts of Hezbollah of a military-rule and using weapons to terrorize the people. The system was deemed to be highly corrupt, inept which was conquered by dynasties and political interests and the protester demanded an end to such a government.

The cabinet resigned under the pressure created by protesters and subsequent resignation of several ministers. Many leaders expressed their desire to step down from the post in the cabinet meeting. The Minister of Health, Hamad Hasan, confirmed the resignation of the Cabinet on Monday after the meeting.

It is anticipated that the blast took place when approximately 2750 tonnes of ammonium nitrate kept in storage near Port Beirut since 2013, caught fire and exploded. The blast was very impact and the shock waves were felt at a considerable distance at the Island of Cyprus. The blast rendered nearly 300,000 homeless and changed even the skyline of the country. The destruction caused due to the explosion is anticipated to cost 10 billion to 15 billion dollars along with the loss of many lives. The volunteers are still clearing the destruction and debris caused due to the blast.

The resigned cabinet will function as the “caretaker” until a new government is formed. The people of the country are furious over the barrage that left the country scarred. The anti-establishment started against the mismanagement, initially started as a peaceful demonstration took a violent turn which led to a significant clash between the officials.

Judge Gassan EL Khoury started the questioning which included several heads of the security agencies and the Chief of the Security, Major General Tony Saliba. As per the official government sources, approximately 20 people have been detained in connection with the blast and the investigations are ongoing.

Ways to having a healthy conversation with students about the news

Daughters have Equal right under Hindu Succession Act even if born before 2005: Supreme Court