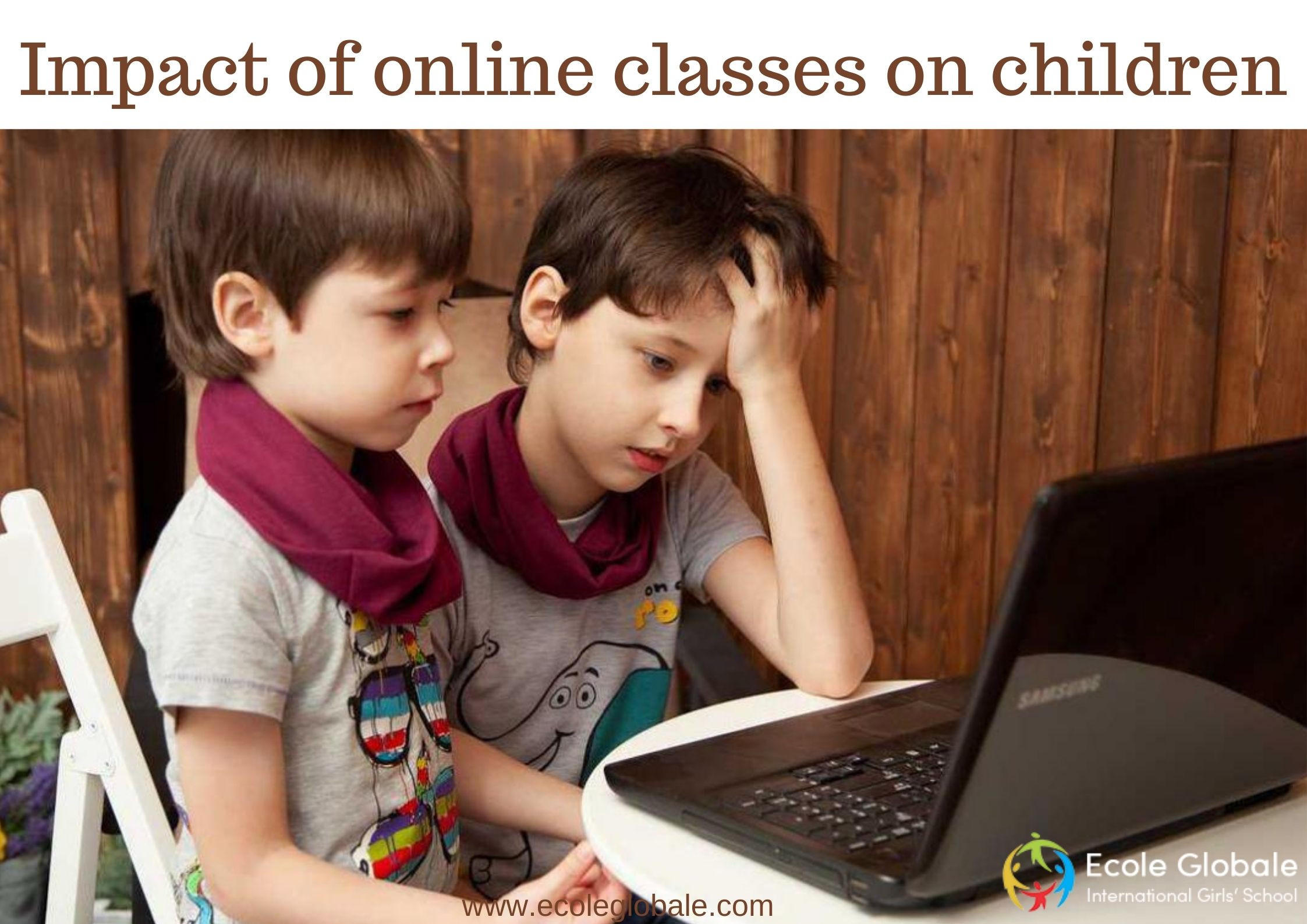 Covid-19 has wreaked havoc and misery over the world in a way no one could have predicted. The entire planet came to a halt in one manner or the other. The life that we knew it was no longer the same. And as a result, change has become the new constant.

The pandemic of the coronavirus has impacted every facet of human existence, even children. Whether that’s a mental state, physical wellbeing, or a mixture of both, kids have experienced their fair share of health issues during the pandemic.

Prolonged screen usage has been linked to an increase in vision difficulties as well as frequent headaches.  Furthermore, anxiety and sadness are now on the rise as a result of house restriction, as are sleep difficulties.

Children who take online lessons at home are not required to be as professional as their peers in the classroom. As a result, their general condition is worsening in numerous ways.

Bad ergonomics: Unlike in International schools in India, kids at home are not required to follow proper ergonomics. One of the most prominent explanations for the current surge in back problems or fibromyalgia symptoms is attending classes online on beds and couches.

Obesity in kids is on the increase, either as a result of the lack of outside physical activities or as a result of unhealthy eating and the widespread availability of junk meals at home.

Kids are losing muscle mass and gaining fat, posing a threat to their development. According to research, greater healthy and active a kid is throughout their growing years, the greater their physical and mental health will be for the following three to four decades.

Online learning has become popular among academic institutions. The pupils were first enticed by the prospect of not needing to hustle to get over to their schools and being able to do it from the comfort and privacy of their own homes.

This tranquility, unfortunately, did not endure long. Pupils’ and instructors’ mental and physical health has suffered as a result of online learning.

What impact did online education have on mental health?

1.  A lack of enthusiasm

Humans are social creatures, and even the most introverted individuals require a human connection from time to time. The kids have become disinterested in their lessons.

The majority of them turn off the webcam and continue about their business. The sluggishness has instilled a loss of enthusiasm in not just the studies, but in everything else as well. The stress of after-school work and tasks has taken a toll on the students.

Pupils’ focus grades in online learning declined when their gaze wandered somewhere else on the monitor. As a result, most pupils found it hard to keep track of the lessons.

The strain to concentrate and provide the desired outcomes has caused a tremendous deal of tension and stress. Tasks, projects, and assignments slipped through the cracks.

The majority of the youngsters appeared to be falling behind and yielding to the strain. The kids’ brains had been messed with and were in a delicate state.

Zoom weariness is a feeling of exhaustion that occurs after participating in zoom classes and video conferences. With the amount of time spent in front of a screen rising dramatically, the mind is being exposed to information, making it harder for the brain to understand it all.

Excessive involvement of families has contributed to the worry and tension that already existed. Parents are taking it on themselves to become heavily involved with their kids and their online lessons because they are restricted to the confines of their homes.

Excessive screen time puts more pressure on the eyes, causing severe headaches. This was true not just for pupils, but also for instructors.

2.  Ethics in the classroom are lacking

The integrity of the class has been severely harmed. Health risks have arisen as a result of stance, uniformity, lack of pattern, and attention. Prolonged sitting has also contributed to weight gain.

The pupils have been restless and dissatisfied since there has been little physical activity. This, too, affected dietary patterns, culminating in physical health problems.

The integration of psychological and physiological concepts to the design and engineering of goods, procedures, and systems is referred to as human factors and ergonomics.

Online learning has led to poor/bad ergonomics, leading to a slew of back problems and fibromyalgia-related disorders.

Obesity is a result of an absence of physical activity in youngsters. It’s just gotten worse as a result of binge eating and viewing.

Unexpectedly, online learning has led to a deficiency in Vitamin D. Lack of sunshine, a bad diet, and little exercise have led to a slew of issues that no one could have predicted.

Which is the best residential school for boys in Delhi?