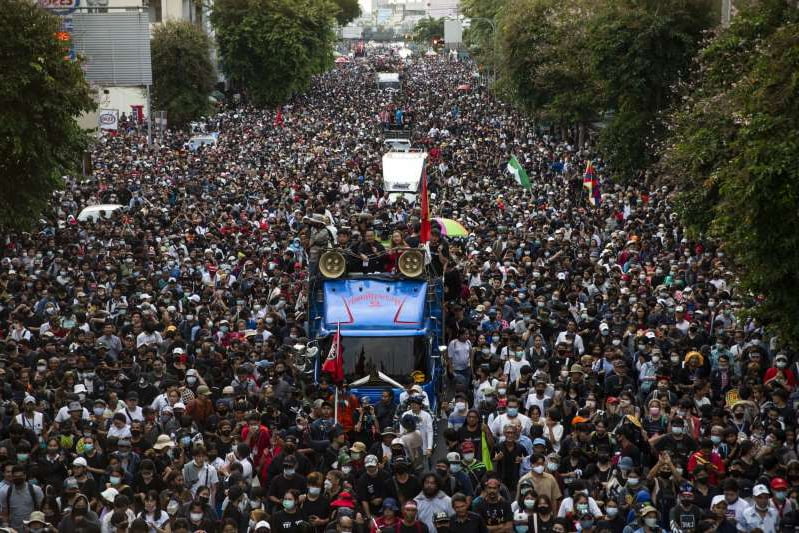 The protests against the government in Thailand became significantly more extensive in the past few days. The protesters took to the streets defying the government’s order of a ban on the gatherings in the capital city, Bangkok and held rallies and demonstrations across the country. The movement started three months back in which supporters were seeking reform from monarchy to greater democracy.

The pro-democracy protesters plan to continue their demonstrations in Bangkok. Thousands of people actively defied the emergency declared by the Prime Minister, Prayuth Chan-Ocha, to subdue the rising protests. They are demanding monarchy reform and Prayuth’s resignation. One of the leading protesters, Parit Chiwarak, was detained on Wednesday near the premier’s office. He encouraged his supporters to carry on the protests until all their demands are fulfilled.

Demonstrations demanded Prayuth’s resignation by shouting “Prayuth get out” on Thursday as they gathered to protest in the central shopping district of Bangkok, Ratchaprasong intersections. They stayed in the spot for several hours and also planned to continue their protests on Friday. The crowd increased throughout the day, demanding the release of the leaders who were detained by the police raids in the morning. The group finally dispersed at 10:00 pm.

The large gatherings are indicative that the protests are nowhere near the end and shall continue to defy the government order that abstains gatherings of five or more people. The demonstrations were initially started by the students, but now more people are supporting the cause. The taboo surrounding the public criticism of the monarchy, who rule Thailand, is broken and pro-democracy activists are on the rise. The demonstrations demand transparency in the utilization of the taxpayer’s money that goes for the benefit of the monarchy.

The protests gained momentum when thousands of people broke through the police barricades and marched towards the Government House. The movement began in early July and escalated recently. The leader of the protestors Parit and Arnon Nampa were detained. Parit had released a statement demanding reform of monarchy and ten demands including revoking of laws that criminalize the act of criticizing the monarch family and prohibiting the king from endorsing any military coups. He also urged the protesters to arrange protests in every province of Bangkok. The resignation of Prayuth is also in demand who is a former chief of the Army and responsible for organizing a coup in 2014. The demonstrators want a new constitution to be written as the older one was written by a military-appointed panel that allowed Prayuth to remain in power.

Prayuth said that the cabinet is open to the public demands of reformation, but everything will be conducted as per the law. He also noted that these demands of minorities would have to accept the difference in opinions of other groups.

COVID-19 pandemic has allowed the government to impose restrictions easily. They have the power to impose quarantines, lockdowns and other disease-control measures without having to go through multiple approvals from the designated authorities.

The protests have expanded at a time when the country is facing one of the worst economic crisis. The tourism industry is at its all-time low because of the COVID-19 outbreak. Thailand is heavily reliant on the tourism and trade industry, which has suffered a significant setback. An emergency imposed at this time will further dent the economy and hamper with the government’s plan of gradually reopening the country for tourism.

The escalated protests have also dented the economic situation of the country further. The foreign investors turned net sellers of $10.6 Billion this year The Baht ( Thailand currency) is anticipated to underperform in the view of ongoing protests.