Skip to content
News:
How To Keep Yourself Mentally And Physically Healthy Amid Coronavirus?
Tips for students to get the best from the home- learning environment
IMPACTS OF SOCIAL MEDIA ON EDUCATION AND THE LIFE OF A STUDENT
Ecole Globale > News > EVERYTHING YOU SHOULD KNOW ABOUT THE BRU-REANG REFUGEE CRISIS 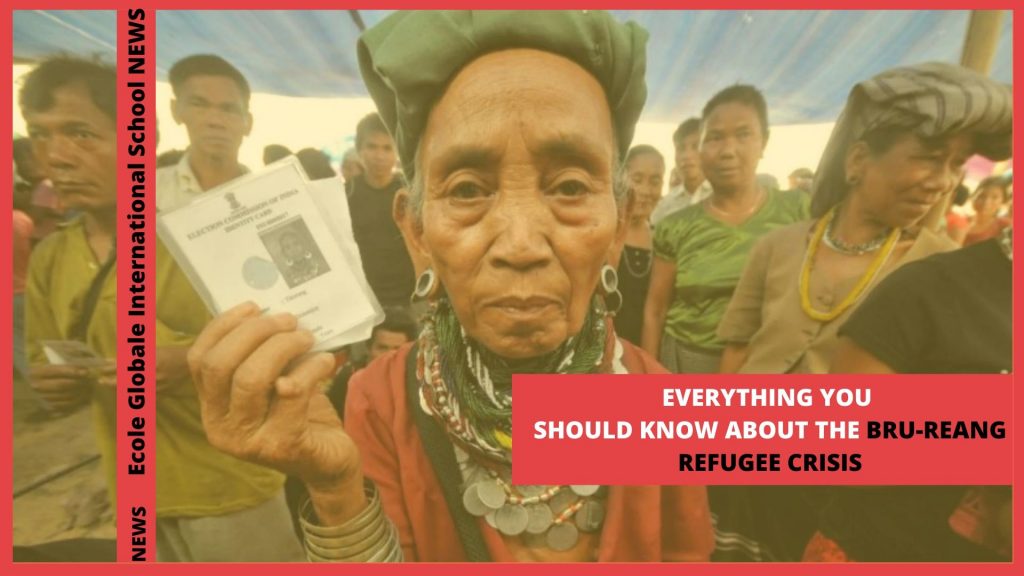 On 17th January 2020, the Bru-Reang agreement was signed between the Government of India, officiated by the Home Minister, Mr Amit Shah, Governments of Mizoram and Tripura and the representatives of the Bru-Reang tribe in New Delhi, India. The agreement, which took nine attempts in its formation, was sanctioned to put an end to the 23-years long Bru-Reang refugees crisis. As per the agreement, people of the tribe will now be able to settle in the state of Tripura permanently. Previously an agreement was also signed in the year 2018 provisioning the sending back of the refugees to their home state of Mizoram. The contract had been proposed by the combined discussions of central government, two states government and the representatives of the tribe. Very few families had accepted the deal and had returned to Mizoram.

Although this agreement could not be implemented due to the widespread protest and backlash received by the people of the tribe, also, with the increased aid, majority of the families had declined the proposal and demanded the government to cancel the agreement.

What are the constituents of the agreement?

Here are a few mentions of the agreement:-

What is the history behind the Bru-Reang Refugees crisis?

The problem started with the 1997-98 ethnic violence in Mizoram, which led to the immigration of about 5000 families of the Bru-Reang tribal community into Tripura. Approximately 30,000 individuals of Bru-Reang tribe had fled and migrated to Tripura and since have been living as refugees in Kanchanpur, the northern part of Tripura. They were sheltered in temporary camps and sustained efforts since 2010 were being made by the government for providing rehabilitation to these individuals. By 2014, 1622 families had returned to Mizoram. Another agreement was formed on 3rd July 2018, requiring the community to return to Mizoram. Only 328 families consisting of about 1369 people accepted this agreement and returned back to Mizoram.

Bru-Reang is the second most populous tribal community of Tripura and is spread across Tripura, Mizoram and southern Assam. They are one of the 21 scheduled tribes present in Tripura and also among the 75 primitive tribes known in India. They are known as Reangs in Mizoram because of their ethnic differences, having their own distinct language/ dialect. About 40,000 Brus are currently living in Mizoram.

The Brus first entered India from the Shan State of upper Myanmar through the Chittagong hill tracts in to the southern parts of Tripura. Another tribe entered Assam in the 18th century. They are found in Tripura, Mizoram, Assam, Manipur and also parts of Bangladesh.

They practice an appealing dance form names Hozagiri characterised by the fascinating music of the flute. Dance is an intrinsic part of their tribe. They speak the “Kaubru” dialect and their society is divided into two major groups- Meska and Moloski.

The Bru-Reang Tribe is nomadic and practices Hilltop Jhum Cultivation as a source of their livelihood. Their everyday sustenance activities include the collection of wild fruits and berries, plants, fire-wood, fishing in stagnant waters and hunting of wild animals. They are religious and follow multiple gods and goddesses, namely Mailoma, Ganga, Mwatikotorma, Tuimba, etc.. Their religion is very much similar to the Hindus. They also accept and firmly believe in the existence of the soul and the spirits.

The marriage system of this tribal community is somewhat similar to the other tribes of Tripura. They marry within their community and do not practice the dowry system. The situations such as divorce and widow re-marriage are only conducted under the supervision of the village council chief known as the “RAI”. The various rites and rituals supplement their cremation methodology. The body is cremated beside the river of Chara.