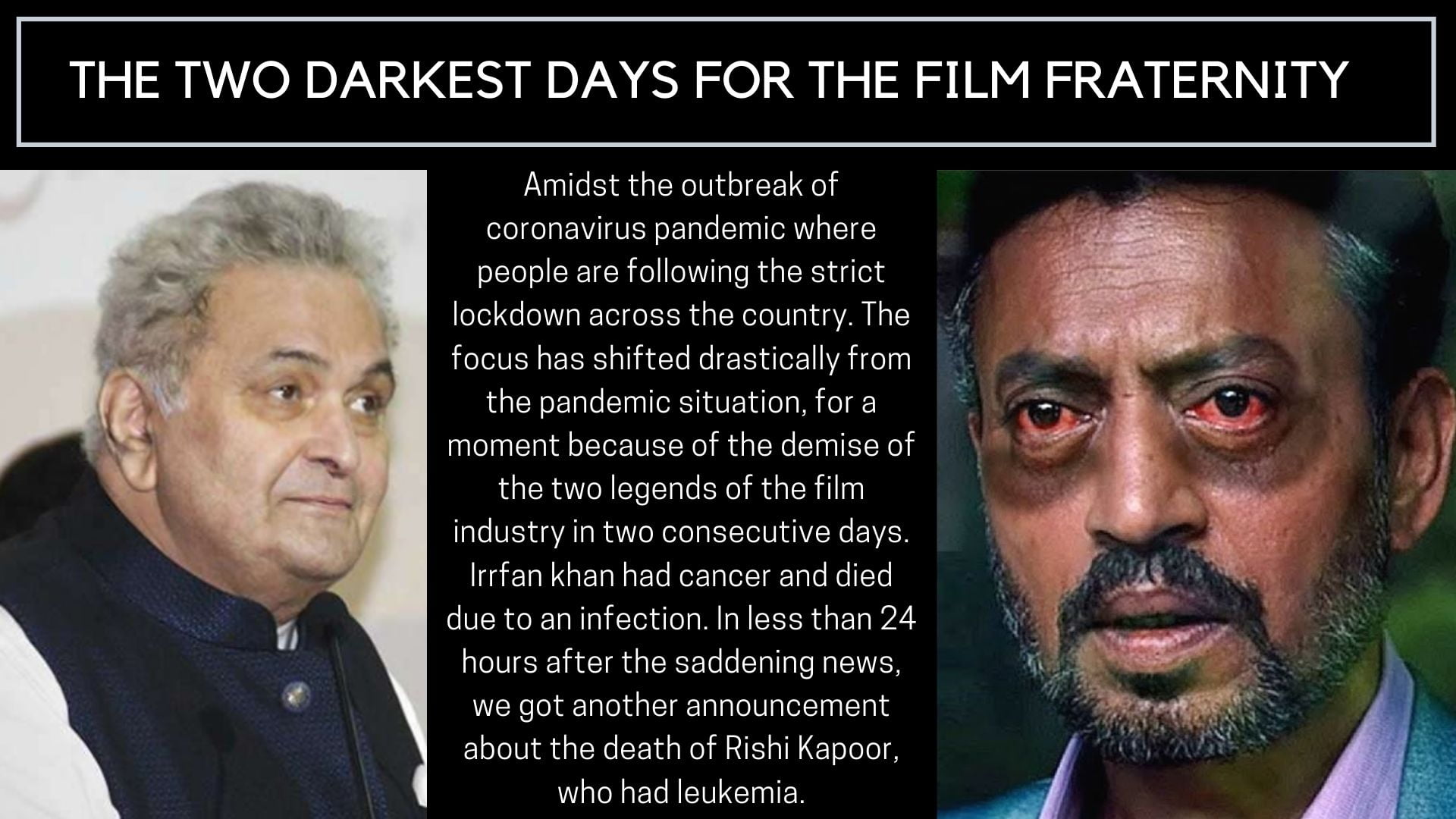 The year 2020 is unfolding with turns of tragic events, and there is nothing we can do about it except to sit inside our house. Just when the people around the world we’re going through a considerable pandemic situation and struggling to survive in the coronavirus lockdown, amidst this lockdown, we have lost the two legends of Bollywood back to back.

On 29 April 2020, the Indian cinema lost one of the finest actors of Bollywood, Irfan khan. Just two years back, Irfan khan revealed the news that he had been diagnosed with neuroendocrine tumors; after getting treatment in the UK for a year, he returned in February 2019. He was referred to Mumbai’s Kokilaben Dhirubhai Ambani hospital on 28 April, Tuesday. He was admitted there for the treatment of colon disease. He died the next day from the illness at the age of 53. Just four days back, his mother, Saeda Begum, died at the age of 83 in New Delhi. Irrfan khan could not attend the last rites of his mother as he was in Mumbai.

The people were not even able to digest the demise of Irrfan khan, and we got another shocking news on the very next day, i.e., on 30 April 2020, that the veteran actor Rishi Kapoor is no more between us. Mr. Kapoor was diagnosed with leukemia in 2018 and then went to New York for treatment. A year later, On 26 September 2019, Kapoor returned to India after successful treatment. He was referred to Sir H.N. Reliance foundation hospital in Mumbai on Wednesday, 29 April 2020. He was enduring some problems in breathing. On 30 April 2020, Mr. Kapoor, at the age of 67, died at the hospital from leukemia.

In less than over 24 hours, we have lost the two legendary stars of Bollywood. Some fans even called it the darkest hour for the film industry. Amidst this lockdown situation, people had no other option apart from social media to express their grief. People all over the world from the prime minister, film industry, fans to ordinary people shared their condolences over the internet. People are sharing old pictures, videos of the two actors over the internet. A photo of Irrfan khan and Rishi Kapoor also surfaced over the internet from the only film they did together, D-Day, in 2013. D-day is said to be one of the best films in the careers of both the actors. They both received a lot of praise for their effortless acting in the movie.

As any large gatherings like funerals, marriages, etc. have been banned due to the coronavirus lockdown rules, the last rites of both the actors were performed in the presence of a few close family members and friends. While following the rituals, the rules and regulations of the coronavirus were strictly followed by everyone attending the ceremony. At 3 pm on Tuesday, 28 April 2020, Irrfan Khan was buried at the Versova Kabristan in Mumbai. This ceremony was on the same day after his revelation of the death was announced. And Rishi Kapoor was cremated where he lived in Mumbai in a small gathering on the same afternoon of his death.

Mr. Khan was a self-made man who had a struggling career at the start. He established his name in the film industry, even at the international levels, through his hard work and passion. Irrfan Khan was at the peak of his career after decades of hard work in the industry, and there was much more to come into his career ahead. Many of his fans and friends feel that destiny has cheated him.

Rishi Kapoor was born in the family who had filmmaking royalty in their blood. His grandfather, Prithviraj, was one amongst the first to set foot into the pre-independence film industry. His father, Raj Kapoor, was a famous film star. And so is his son, Ranbir Kapoor and other nieces. Rishi Kapoor started acting at a very young age in the film of his father, who was also a director. His last movie, ‘Mulk,’ was released in 2018.

In this pandemic situation where everyone is struggling to survive the passing of the two cherished actors was hard news to take. Many people were sad as the two beloved actors were sent off without the befitting crowd of their loved ones.