Skip to content
News:
FACT-CHECK: FINAL PRESIDENTIAL DEBATE BETWEEN DONALD TRUMP AND JOE BIDEN
PRIME MINISTER MODI ADDRESSES THE NATION ASKING CITIZENS TO BE CAUTIOUS AGAINST COVID-19
ROLE OF EDUCATIONAL CONSULTANCY IN PROCESS OF EDUCATION
Ecole Globale > News > Reasons for not giving up on disruptive students 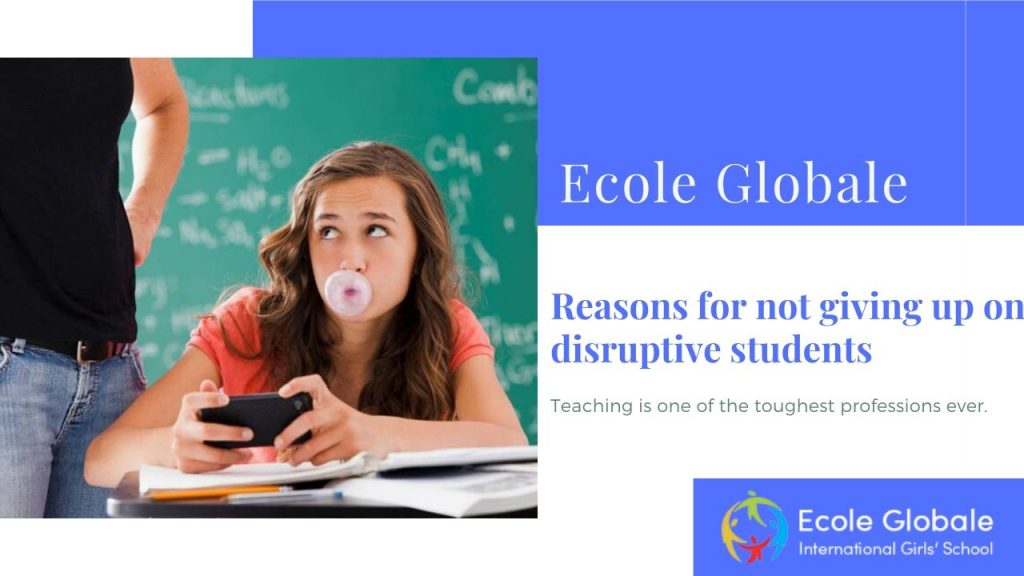 Teaching is one of the toughest professions ever. At each stage, they face many challenges as not every student has the same mindset. Students differ from disciplined ones to mischievous ones. Sometimes it is a tough job to handle miss behaving students.

Teachers daily have to go through various tantrums of students. Reasons behind the student’s misbehavior are as follows:

How do disruptive students disturb the class environment?

Everyone in teenage would love to misbehave with teachers, but it’s not right. They think misbehaving with a teacher is the best way to gain attention and look cool. Sometimes, this behavior becomes infectious and influences other students, and they too start misbehaving in the classroom. Due to them, the teacher’s authority and time get compromised. Students who have set their high goals of the studying also gets affected due to their misbehaving.

There’re various types of disruptive students found in a class such as:

Due to these misbehaving students, teaching gets disturbed. Teachers just have a limited time to take up a session then such misbehaving elements consume their time and efforts. Teachers often ignore this student during classes so that other students don’t get affected and can get proper knowledge.

However, studious ones always get affected by the misbehaving ones. Some misbehaving students interrupt them by throwing paper balls. Sometimes it also happens that mischief of students gain the attention of other students and gets disturbed during lectures. This results in low grade and behavior issues. Sometimes they also get influenced by disruptive students.

Moreover, it also gives a negative impact on school reputation as studious ones and teaching gets affected. Finding ways for handling disruptive students may gain the time of lectures and indirectly knowledge.

Teachers are also human they also get angry when their efforts are not valued by students. Abstaining getting discourages the teachers due to their behavior and don’t give up on them. Following are some points to handle them:

Implementing these above points will show positive efforts to disruptive students.

Teachers do not always get good and disciplined students. Sometimes, they have to accept a challenge to tackle various tantrums of students. They should find the reason behind their misbehavior instead of giving upon them. Teacher’s get angry in order to shape the student’s future in the right direction, so don’t take their anger in the wrong way.