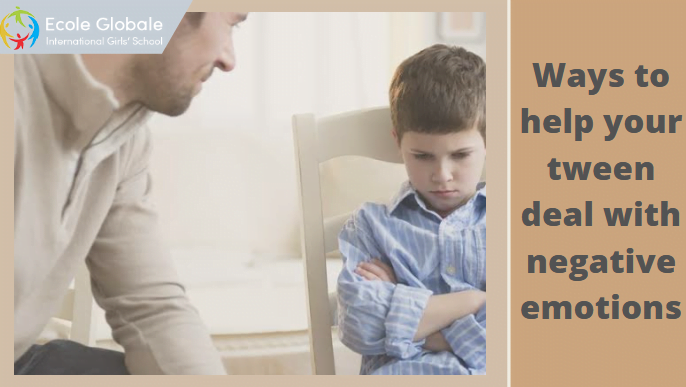 Tween faces various physical and emotional changes before, during and after puberty which are quite significant but dealing with all of the negative emotions is the most challenging aspect of growing up. Children face various difficulties in managing their negative emotions, and because of that, they remain angry, confused and frustrated.

How we can deal with negative emotions

There are times when sadness is felt by every tween and teen, which may be due to some incident or due to a fight with a friend or tween might be feeling low or not knowing the reason exactly. At that time, your tween might not do anything and stay quite keeping the problem to himself/herself until it is sorted out.

Suggest your child take the advice of some good friend of yours if he /she wants to. Also, give him/her some time and space to sort out the things themselves.

However, if your child continues to remain sad, seek medical help from the counsellor or paediatrician. Your tween could be suffering from depression. that will be worse for your kid and it comes because of  Negative emotions related to others or maybe with himself

child behaviour is One of the hardest emotions to deal with his anger. Your tween might feel angry if he/she thinks life isn’t fair to them or when given an unkind treatment. When his/her anger emotion is heightened, then he/she may lose control and may feel like exploding. It is important to help them in managing their anger impulses by setting the limits on aggression and also making them do some physical exercise. They should know that they are not allowed to pick on or yell or hit their younger siblings. They can express their feelings, but they need to control their anger.

Help your tween in identifying the situations when they get furious and methods to control and develop a system for redirecting emotion outburst. Dealing with negative emotions is the very hardest thing in which a person cant think positively and always be fighting with others because of anger in his/her mind

This is one tough emotion. At times tweens are confused about the changes happening in them during puberty. This makes them self-obsessed due to which they always think that something terrible is going to happen to them, and thus they start losing trust in everybody, even good friends.

If paranoia continues to persist in your tween, then you should seek medical help from an expert. A lengthy period of paranoia in your tween signifies that he/she might be facing some other issues, so there should be no delay in seeking help. Occasional paranoia, however, is not much to be worried about as specific ups and downs of teenage are understandable. the child behaviour will be changed directly he/she always be in paranoia attack which is dangerous for other people. The Mental condition can create many problems for others

Teach your tween the social skills of how to speak in front of a group or at the stage or in a class. They need to know that they have to take their permission to feel embarrassment. They should know how to laugh at their minor embarrassments and if possible, to shed them away from their minds.

Make your tween understand that peers are not very much concerned with them. Help them in building confidence by showing the right direction, which will ultimately minimize embarrassing situations.

Tweens should know that if the potential embarrassing situations continue to prevent them from doing things, then he/she may not be able to cope up with this competitive world and may not be able to do their most desirable things.

Children with low self-esteem often feel jealous of others, due to which they treat them badly. Thus they develop potentially self-destructive behaviour and may face several challenges. Tweens may get jealous of their friends, sibling or someone they don’t know.

The first step in helping your tween who exhibit jealousy is, acknowledging it. If your child is jealous of the new boy in the class who has become friends with your child’s best friend or jealous of his/her sibling, then talk and make your child understand that there should always be room for more friends and friendship should never be exclusive.

If your tween behaves in a very controlling way, then he might be having Abnormal or pathological jealousy. Such a child who can’t manage or control jealousy needs therapy.

Lying is a behaviour and not an emotion but in the discussion about the negative emotions of the tween, lying needs to be discussed. There are many reasons for which tween may lie,’ if your child thinks that avoiding the truth isn’t a big deal or when he/she doesn’t want to get in trouble or when he/she want to avoid discussion about something’.

Try to take appropriate action after finding out why your kid is lying, without being judgmental. If your child lies to avoid discussion about something, then try to avoid the conversation until he/she wants to talk about it and if your child is lying to stay out of trouble then let your child know that it is always better to take the path of truth.

Why Sensory Play is Important for Child Development

How to unleash your full capability at work