Skip to content
News:
Great Ways to Start Your Day- A healthy lifestyle starts every morning
Creative activities for kids during a Coronavirus
MAKE LEARNING A FUN-FILLED ACTIVITY
Ecole Globale > News > AMIDST THE LOCKDOWN, THE ANTI-CAA PROTESTS AT SHAHEEN BAGH REMOVED 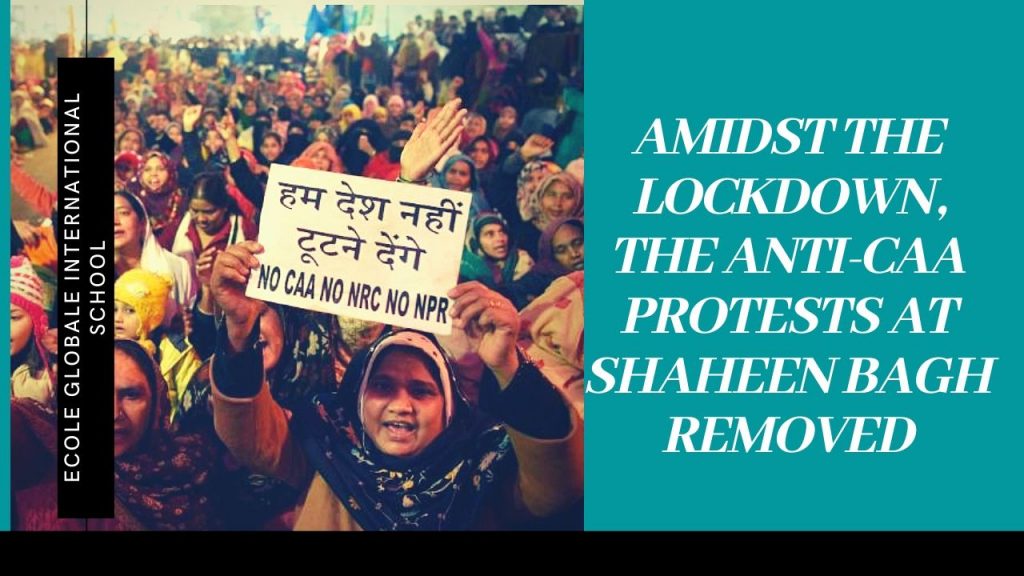 The anti-CAA protests that had been ongoing for weeks now at the Shaheen Bagh New Delhi were removed in the morning today. The novel coronavirus pandemic scare is significant all around the world due to which the government has imposed a strict lockdown in 606 districts all around the country.

Last week, the Delhi Police requested and advised the anti-CAA protestors, especially the women, to call off their allegation for the safety concerns.

At around 7:30 am on Tuesday, 24th March 2020, the police forcefully removed the protesters from the Shaheen Bagh. In the process, about nine people, including three women and six men were arrested and detained. The protests have been going on non-stop for around 101 days, have finally cleared.

The colossal threat posed by the COVID-19 all around the world has now made the government resort to strict measures to curb the situation. The disease is highly contagious and poses a high risk of spreading in public places. A lockdown is imposed all over the country, along with section 144 implemented in several states.

Shaheen Bagh protests had been going on for a while to oppose the CAA-NPR-NRC process proposed by the government to give citizenship to the persecuted minorities outside in India in countries including Bangladesh, Pakistan and Afghanistan. The citizenship is being provided to the Hindus, Sikhs, Buddhists, Jains and Christian minorities. After implementation of the CAA, Home Minister had indicated implementation of NRC all over the country, which would eliminate all the illegal immigrants.

The protests rose when several groups realized that the CAA-NPR-NRC combination is unfair for the Muslim community. If they lose their citizenship under the process of NRC, then Through CAA they will not be offered citizenship. This decision of the government had received massive backlash from all parts of the country. The supporters and protesters of this act clashed at several places, and a very severe consequence of this was also observed in Delhi when the communal riots took place killing numerous people.

The Shaheen Bagh protests had been going on for more than three months demanding the government to call off the decision to implement the Citizenship Amendment Act (CAA), National Register of Citizen (NRC) and National Population Register (NPR). These acts were being conferred as anti-Muslim.

The sit-in protests of Shaheen Bagh were ongoing from 15th December and had generated a stir in the country. It had also caught the attention of international media, and the women protestors were being referred to as Dadis (grandmothers) of Shaheen Bagh.

Last week the police authorities had requested the protestors to call off their allegations at such a time of emergency. The protesters had denied the request and stated that the protests would carry on under every circumstance with the necessary precautions. After repeated requests from the various authorities, the size of the gatherings was reduced.

On Tuesday, the police reached the site of protests at 7 am. The protesters were persuaded to evacuate the site, but they refused to clear the site. At around 7:30 am, the cops resorted to force and removed the protestors. The protesters were breaking the law as a large gathering of more than five people are banned under section 144. This section has been imposed due to the COVID-19 pandemic outbreak. The procedure led to the detention of 9 people which included six men and three women.

Other sites which had been influenced by the protests at Shaheen Bagh were also cleared. The civic body would clean the protest site. There were around 50 people gathered in the protest site, confirmed the police officials.

The national capital, Delhi has till now registered 30 cases of the novel coronavirus. All across the country, the cases have neared to 500 total with nine casualties. The situation has forced the country to go into lockdown. People are not allowed to come out of their homes, and strict measures are being taken against anyone who is breaking the law. The global pandemic has severely affected various countries and India is taking every possible action to reduce the severity of the situation.