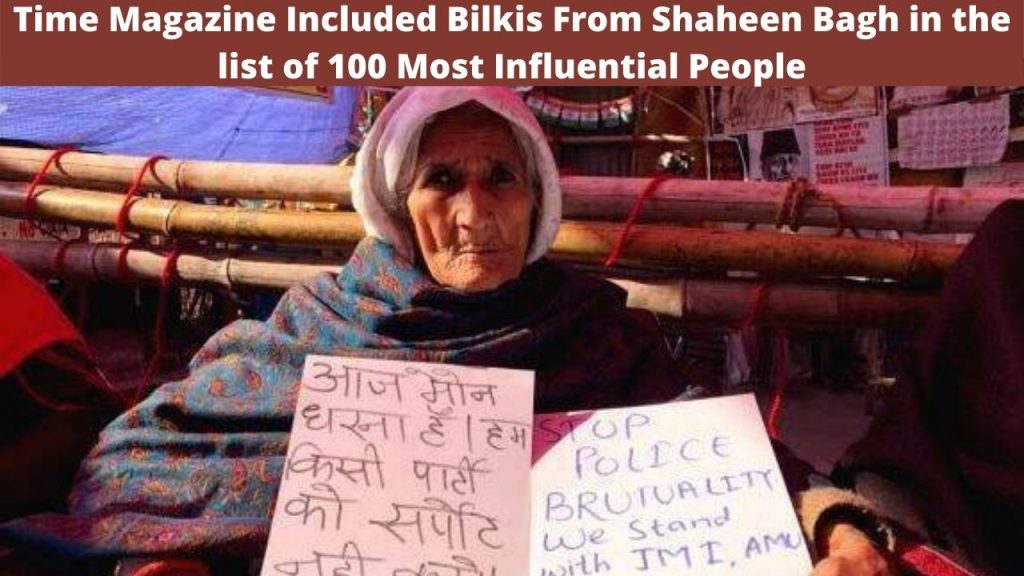 Time Magazine released the list of most influential people in 2020 in which they included the famous ‘Dadi’ of Shaheen Bagh. Bilkis, an 82-year-old woman, had led the Anti- Citizenship Amendment Act (CAA) protests in Shaheen Bagh in Delhi.

On 11th December 2019, the Citizen Amendment Act (CAA) was legislated by the Indian Parliament. The act granted Citizenship to the unauthorized migrants from Bangladesh, Pakistan and Afghanistan pertaining to the Hindu, Buddhist, Sikh, Parsi, Christain and Jain minorities. According to this act, anyone who had fled to India from Afghanistan, Pakistan and Bangladesh belonging to the mentioned minorities before December 2014, would be given Indian Citizenship.

In this act, Muslims were not given any such provisions which eventually triggered a lot of protests all over the country. The act faced heavy criticism for its religious bias towards one particular minority. Protests were also rampant in several north-eastern countries like Assam, who feared that the refugees would pose a problem for the present residents and affect their rights.

One of the most widespread and influential protests were experienced in Delhi at Shaheen Bagh. The participation of ladies in the protests, amidst the harsh weather conditions, was a remarkable move that attracted a lot of media attention from all over the world. The ladies were adamant and stood at the site demanding the government to revoke the CAA law.

Bilkis, one of the Dadi at Shaheen Bagh inspired a lot of people all over the country. She is an interview has said that they would not move even an inch from the site even if gunfires are released upon them. She also said that we had compelled the Britishers to leave the country, so who are these people in power? If both NRC and CAA are revoked by the government, they will vacate the site in no time.

In a famous article written by Rana Ayyub, the determination of these “Dadi’s” is highlighted inspiring millions of people all around the world. The article mentions how Bilkis, an 82-year-old senior citizen, became the face and voice of the minorities and marginalised societies all around the world. They stood at the place even in the harsh weather conditions displaying sheer determination and inspiring people. Even the threats of the supporters did not scare away the protesters.

The protests went on for months. The spread of the COVID-19 pandemic caused the people to leave the site with the resolution to continue as soon as the conditions are normal. The main concern of the protesters was the National Register of Citizens (NRC), which was to be followed after the CAA law as per the government. Protestors disputed that the minorities mentioned in the CAA act would be eligible for citizenship even if they did not have the necessary documents. Still, Muslims will be excluded and will be forced to leave the country.

Bilkis firmness was an inspiration to the students, leaders and people all around the country who carried out the protests for several months. Time Magazine recognized her efforts and hence included her in the list of 100 most influential people of the year 2020.