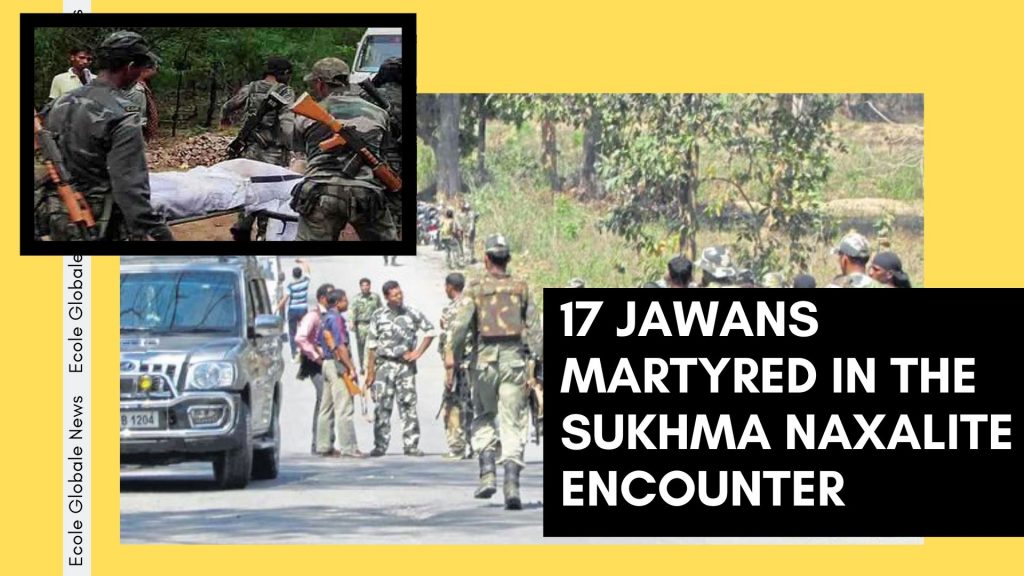 In the encounter that took place on the afternoon of 21st March 2020, several soldiers of the state security forces were attacked by the 250 Naxalites in Sukhma, Chhattisgarh. On Sunday, 17 bodies of the security personal were found in the jungles of Chintagufa by a big search party of about 150 men.

Naxalites assaulted a joint force of DRG, STF and CPRF’s CoBRA team in which more than 600 jawans were involved. In the tough encounter in the Minpa area of Sukhma, an estimated 250 Naxals were firing on the soldiers, confirmed IG Bastar P Sunderraj. He further informed that five teams of STF and DRG had come under heavy fire, but the groups did not panic and scatter and dealt the situation in the best way. The circumstances could have been worse than the 17 casualties and 15 injured in the whole process.

The encounter continued for about 3 hours. The injured personnel were airlifted and transported to Raipur, where they were admitted in a private hospital for treatment. Two personnel are stated to be in critical condition.

About 15 weapons are said to be missing including:-

The ambush by the Naxalites was directed by the CPI ( Maoists)’s Battalion No.1. This is the most dreaded force of the Maoists, which is always battle-ready, and the head is the infamous Naxal leader Hidma.

A joint operation was launched by the teams of DRF, STF and CPRF’s CoBRA after receiving the inputs of the presence of Naxals in the nearby forests of Elmagunda. The forces were sent when a superior intelligence was received that a meeting of the top CPI (Maoist) was underway and many Naxals from Telangana had gattered in the area. Since the information received was of the high priority the forces were compelled to act on it immediately, and a nearly 600 jawans were deployed for the mission.

The operation was launched from Chintagufa, Burkapal and Timeleada and the DRF was fired by Naxals when they were advancing through the Korajguda Hills. Initially, all the attacks were tackled successfully, but a massive ambush took place on the DRF and STF jawans when they were returning to their camps at 2:30 pm.

It appears that Naxals had been informed of the incoming forces and had planned their moves accordingly. First, the forces entered the forest area of Kadalpad. Since no traces of the Naxals was found, they retreated. After their retreat, the Naxals assaulted the personnel when they reached Koraj Dongri. The jawans who had survived reported their senior of the fire, as they are rescuing their injured teammates.

Saturday’s encounter was a staggering one. It is being considered to be the deadliest one after the 2017 Burkapal battle. In that about 25 CRPF jawans had lost their lives. The area of the Saturday’s clash is situated near the site of the 2017 encounter.

Several sources of STF also informed that the attacks were possibly directed by the new chief of the CPI (Maoist) Basavaraju. In the last few encounters, it had been observed that the Naxals were shooting an average of 2,500 rounds per battle. This indicated that the Naxals have a good source of ammunition. Their weapon accuracy has also improved.

After the ambush, a major rescue operation was launched on Sunday morning, and 3 of the missing 17 soldiers were found and were provided with the necessary medical help. The remaining bodies were recovered by the evening. After the killing of the BJP MLA Bheema Mandavi in 2019, this is another significant encounter from the Naxals in the State of Chhattisgarh.

Naxals or the Naxalites are the members of the Communist Party of India (Maoists), which is a political organization. CPI is marked chiefly by the left ideology and follows the legacy of Marxism. It was founded in 1969. The name Naxal comes from the village in Naxalbari in West Bengal. The Naxalite peasant revolt took place here in 1967. They are supporters of Maoists and believes in the power of people. They aim to overthrow the government and implement the far-left radical ideology through the power of people. Naxalites are supportive of Mao Zedong’s political ideologies.