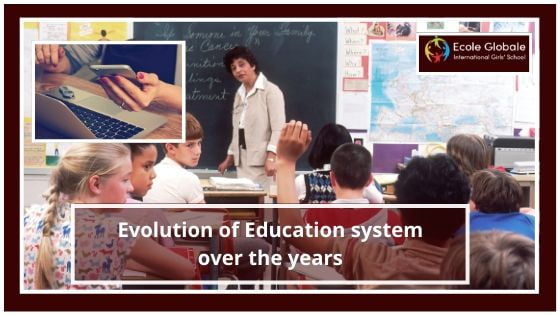 Evolution the generic sense indicates the changes in the species of earth to adapt with the changes in the surroundings. Evolution dictates the survival of the fittest and natural selection. Hence, evolution just cannot be avoided in this progressive and transforming environment. Evolution is a crucial part of every sector of life We have experienced the evolution of every aspect that affects our everyday lives be it the society, mentality, mannerisms, industries and organizations, transportation, education and basically every other imaginable part of the community.

One part that has seen tremendous growth over the centuries is the education system. From being one of the several non-existent entity in the stone-age, to becoming one of the most potent commodity for survival, education has come a very long way.

Sow how did education come into form? It dates back to the ancient ages, when a need for a common communicative language was felt by the humans. Once the interaction was established, the progression of the society geared up to a faster pace.

After some time a need for the preservation of certain, thoughts, ideas etc was felt. In order to convey a certain message, the people of the stone age used to draw figurines on the walls of the caves. This was one of the very first evidence of the emergence of writing knowledge in human beings.

As the times progressed, the  importance towards written communication was enhanced. Several languages were developed and people started to preserve their thoughts in the form of texts. This was done by engraving on stone or clay slabs.

Then the papyrus was discovered which laid the groundwork for the most important invention, the paper. Invention of paper revolutionised certain sectors and also gave birth to this concept of “education”.

CHANGES THROUGHOUT THE AGES

Contemporary educational system is very advanced and it is quite conspicuous, that the scenario was not always the same. The concept of the schools, classrooms, educational curriculum are very recent. In the earlier times education was regarded as the ability to read or write. Parents taught their kids and schooling was not a very important consideration.

We have covered a very long and advancing path since they and the present education scenario has emerged out to be a very efficient and productive one.

Here are a few changes that have been observed over the years:-